A few weeks ago, my dad told me that he had been craving chuck pot roast. He called around to all the elders in the family to get their recipes, and proceeded to make his own rendition in the crock pot. I took one thing from this conversation–as far as I could remember, I had never eaten pot roast. A dish that is nearly as American as apple pie, the very incarnation of meat and potatoes. It needed to be in my repertoire.

So I made it for the first time, and I now know what I’ve been missing out on. Buttery, impossibly tender meat with a delicious beef gravy. There is a reason that chuck pot roast is a classic. It warmed my tummy despite the cold evening, leaving me full and ready to sleep off the hearty dinner. 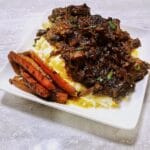 Buttery, impossibly tender meat with a delicious beef gravy. Inspired by recipes from TheKitchenista and On Ty’s Plate.

The Kitchenista served her pot roast with a delectable set of sides that I decided to replicate in my own way: Horseradish Mashed Potatoes and Glazed Carrots.

As a base, I used Chef Raquel Fox’s recipe for Roasted Garlic Mashed Potatoes from her Dining in Paradise cookbook. After I made the mash with potatoes, heavy cream, and butter, I mixed in horseradish and sour cream ala this recipe.

For another great American meal that is perfect for the wintertime, check out my Southern Mac and Cheese with BBQ Ribs and Collard Greens.

Previous Post: « A Guide to Food in The Bahamas: Chef Raquel Fox’s Dining in Paradise
Next Post: A Conversation with Whetstone Media Co-Founder Stephen Satterfield »

This site uses Akismet to reduce spam. Learn how your comment data is processed.

Welcome to my blog! My name is Sharila, and I love all things food. I have a particular interest in the cuisines of the African Diaspora. I feature the food, books, and cultures of African descended people across the globe. Join me!
Learn more →

Load up on new recipes + more

Thank you for subscribing!